I was looking for information on Cane Corso size. I thought I should share the info. Here are some things you should know.

What is the average size for a Cane Corso? Adult dogs average between 100 and 130 lbs for a male Cane Corso, and between 90 and110 lbs for a female Cane Corso. Bigger is not better. Cane Corsos are not intended to be the biggest mastiff breed, they are valued for their speed and agility. Bulking them up beyond their intended size compromises their agility and is detrimental to their health and longevity.

There are some really important things to consider, when thinking about Cane Corso size. We'll dig in deeper and see what those are. First let's look a little more closely at Cane Corso puppy height and weight. 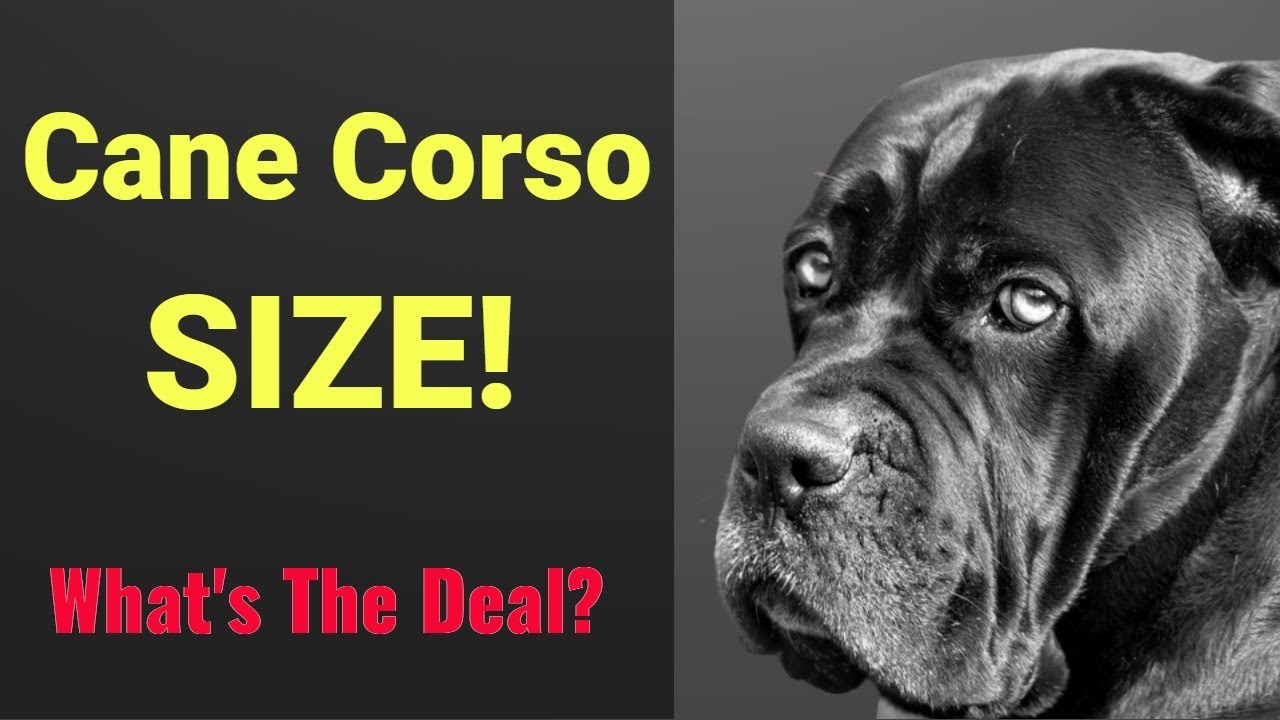 *Please note: weights in the following chart are average. Most dogs will fall in a range of +/- 10% either side of these numbers. An individual dog can vary considerably.

And here is the same table, with weight in kilos:

*Please note: heights in the following chart are average. Most dogs will fall in a range of +/- 10% either side of these numbers. An individual dog can vary considerably.

And here is the same table, with height in centimeters:

Height in dogs is usually measured at the withers. The withers is the spot halfway between the shoulder blades. For most dogs, this is the highest point of the body. The head can be higher than this, of course, but the head is too mobile to be used as a measuring point. The withers provides a defined and relatively static point to measure to.

It will take over a year for a Cane Corso to reach full adult height and weight. Growth should be steady, as shown by the Cane Corso Size Chart above.

Puppies are deaf and blind at birth. This is the same for every dog breed. They can't bark in the first week. Their only real activity is sleeping and feeding

At around four weeks old, puppies can start on solid food.

The puppy should be vaccinated at six weeks old. The majority of a puppy's early learning takes place before the four-month point.

The Cane Corso puppy will lose his baby teeth somewhere around 4 to 5 months.

At around six months, you can start to take your puppy on short walks. He will be acting and looking less like puppy and more like a grown dog by now.

However, he still has a lot of growing to do, so be careful not to over-exert him with walking and exercise. Keep it brief.

During this period, most puppies will become housetrained.

But do not be concerned if it takes a little longer...

One of our Cane Corsos famously took three years! But, once he got it, he really got it. It was like flipping a switch, and he never had an accident again!

As your dog reaches the end of this period, he will be close to his adult size, although he does still have some growing to do and some filling out.

The Cane Corso breed is a large breed dog. Your Cane Corso will take quite a bit longer to fill out completely, and he may still grow a little taller, but he will be looking like an adult dog by now.

Accordingly, you can change over to adult food, somewhere around the 12 month mark.

From 12 months onward, your Cane Corso is effectively an adult dog.

Any development or growth will be much slower now. By 18 months he can be considered fully grown.

He should be reaching the upper numbers in the size chart above. But there is always variance in the numbers.

The biggest determining factor in your Cane Corso's final size and weigh, is genetic. The characteristics of his parents and grandparents will have a large influence.

After genetics, the next highest factor is food. The Cane Corso is a large muscular dog breed, and his diet must contain sufficient protein. You should take care that his diet is relatively low in fat and calories.

There is actually a correlation between litter size and the size of the dog. Larger dog breeds typically have larger litters.

They are simply biologically able to carry more. In general, the largest numbers occur in the 3rd to 6th litters. The first two litters are typically smaller, and later litters tend to diminish as the age of the mother increases.

The age of the male also factors into litter size. Cane Corso dogs between the age of one and five are likely to father the largest litters. This is generally true in other breeds also.

Cane Corso litters range from 6 to 10 on average.

For the average person, looking to be a responsible Cane Corso Owner, your expected price range will be between $2500 and $3500. For this, you will be able to deal with a reputable breeder and purchase a purebred CaneCorso puppy, with good lineage and health checks.