Can Cane Corsos Live With Other Dogs?

Living with two Cane Corsos for 14 years, with other dogs, has given us many experiences which help to answer this question. 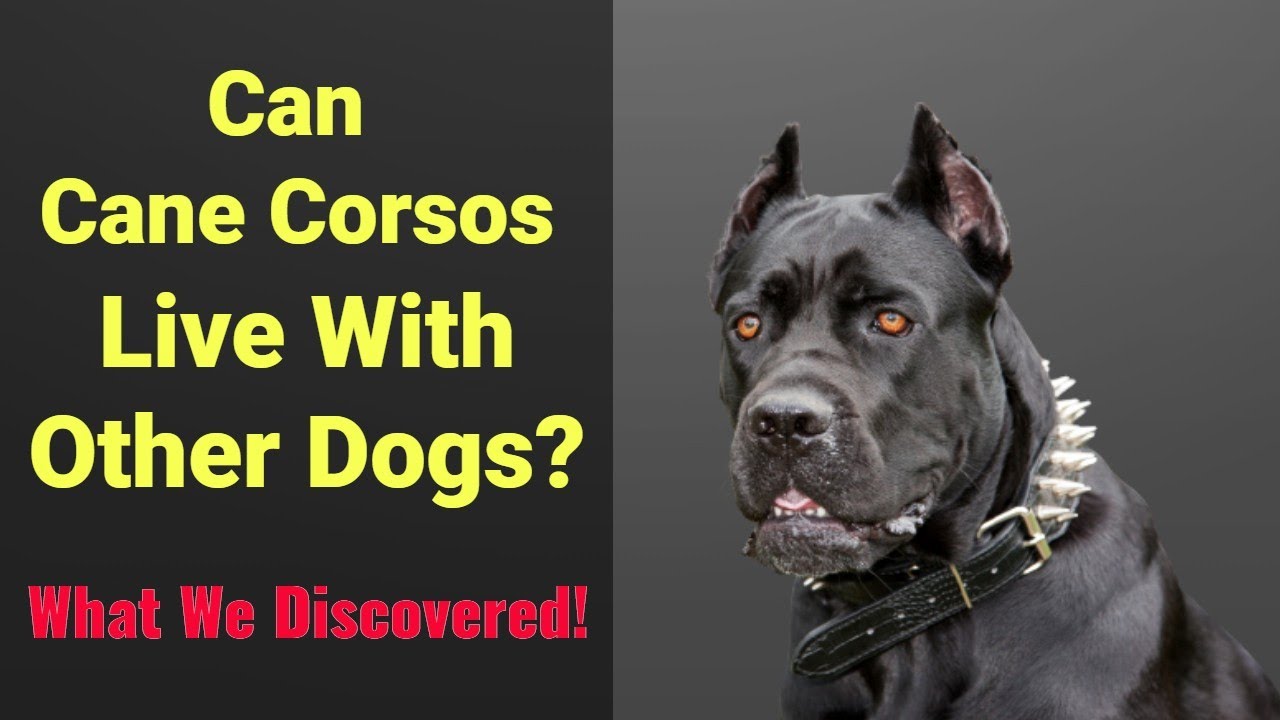 Let’s get into the things you should think about — some general, and some specific to your situation. We’ll tell you about our experiences and how they worked out.

Firstly, think about dog behavior in general. Regardless of breed, dogs are designed to live in packs. They typically work out their pecking order and live in harmony.

Sometimes this can be alarming to us humans, as dogs growl and snap at each other. But they are usually not intending to hurt one another. They are establishing leadership, alpha and beta, positions on the totem pole, whilst avoiding fighting.

Next, you should consider the breed characteristics of the Cane Corso dog in general. Each dog breed has its own essential qualities. The Cane Corso is an Italian Mastiff. It's not the same as an English Mastiff, although the two share some similar tendencies.

Italian mastiffs are further divided into the Cane Corso and the Neapolitan Mastiff. But these two are also quite different. The Neo is larger, more bulky and more jowly. It is typically more stubborn and dominant. The Cane Corso is more muscular and less bulky. And incredibly agile. It is loyal and intelligent, and more social

Getting into the details you should consider, first and most obvious is this: the Cane Corso is a large strong breed. Not only is it a mastiff breed, it has the natural tendencies of a guard dog. A dog owner must always take responsibility for training and socializing. But this is particularly important with a big dog, because out-of-control behavior potentially carries more consequence with a large breed.

So, throughout this article, temper what is being said with the requirement to observe and control the behavior of your dog, and adjust where necessary. It’s perfectly possible to have your animals living in harmony, but a lot of it is down to you, and what your animals perceive that you will accept or not accept.

Cane Corsos also typically have an independent streak, and an inherent prey drive.

As far as independence is concerned, our experience is that intelligence and loyalty have a stronger effect. The Cane Corso becomes attached to his owner and his family, and independence takes a back seat.

In terms of prey drive, again, the family consideration tends to mitigate this. There is an article here ‘Can Cane Corsos live with cats?’ where we described how ‘our’ cats became ‘their’ cats as the Cane Corso family dynamic developed.

The Inherent Character Of Your Own Cane Corso

Now let’s think about the inherent character of your particular Cane Corso. This is where it is so important to find a good Cane Corso breeder and communicate with him or her. The breeder will know which puppies in the litter are most dominant, which are more submissive etc.

A reputable breeder can then help you select a puppy with a suitable personality and appropriate tendencies.

A word of caution. Some breeders are catering to a segment of the market that wants a dangerous-looking dog. The imposing appearance of the Cane Corso is well suited to the image of a huge muscular dog with cropped ears, a studded collar and a thick chain as a leash.

If you're looking for a Cane Corso that will live well with other dogs, make sure you are not dealing with a breeder who produces dogs with an aggressive attitude.

The way you treat, train and interact with your dog will be the biggest factor in his development. But you’ll get better results, with less work, if you start out with the best raw material — a puppy with the right inherent characteristics for you.

Providing a home for a dog is a beautiful thing. We have had two rescue dogs, as mentioned in this article, and it is great feeling to know that you have made them safe and protected.

However, a rescue dog may bring its own problems. And you lose the chance to train a new dog all the way up from a young puppy.

An older dog may be set in its ways, and they may not be your ways.

Combine that with the size and strength of the Cane Corso, and the fact that you specifically want a dog that will get on well with other dogs. You're getting into potential difficulty.

You can certainly speak to the people who are currently looking after the dog. Just as when dealing with a breeder, it's essential to discuss your circumstances, and what you are looking for in a dog. Bear in mind that you should be extra diligent in finding out about the dog's character.

Just be careful bringing an older rescue animal into your life, when it has to fit in with other dogs. It's a decision with extra considerations, compared to getting a new puppy. (Potcakes are mixed-breed street dogs/wild dogs, on the island where we live. Phyllis was living wild, semi-feral, when we rescued her. But that’s another story.)

So, what did Maud encounter, when she first joined us?

Well, Willard, the Spinone was pretty aloof. Murph was a typically laid-back labrador retriever. And Phyllis, the potcake had done a fantastic job of quickly adapting to family life from her life in the wild. But she had a typical Potcake tendency to try to dominate where she could.

Maud put up with this, while she was a puppy. But there came a point where enough was enough. By this time, she was twice Phyllis’ size and had no reason to submit to any nonsense.

So one day, we hear a kerfuffle, and we find Phyllis lying on the floor with her legs in the air. Maud was standing over Phyllis, gripping her by the throat.

But Maud didn’t hurt Phyllis. That was never her intention. As she became an adult dog, she was just letting Phyllis know that she wouldn’t be bossed around any longer.

A couple of years later, we got our second Cane Corso puppy.

Herman, Hermie, or simply Big Herms was Maud’s brother from another litter. Like Maud, he was brindle. A Cane Corso pup is a beautiful thing, and we came to love brindle dogs

Along the way we lost Willard, Murphy and Phyllis and we were left with just our two Cane Corsos.

Herms grew to be huge, but he had a beautiful temperament. At 130 pounds, he was nearly 20 pounds heavier than Maud. But Maud was always the boss.
There was never any difficulty with this. Herms came in as a puppy, he accepted Maud’s leadership. And that never changed, even as a much bigger male Cane Corso.

We lost Herms at nine years old. Not a bad age for such a big dog, but totally unexpected, because he appeared still so strong and vital. A huge blow, coming out of the blue.

Herms had been incredibly sensitive. He had a special relationship with my wife, who suffered from migraines and would sometimes be laid out for days at a time. Herms would stay by her side, however long it took. He would occasionally check that she was still breathing. We called him a 'migraine support dog'. A gentle giant with a special temperament.

Bringing A New Dog To Live With Our Cane Corso

Some time later, with no plans for a new dog, we encountered another potcake, who needed rescue. This was Olive, who came to us as a puppy of about five months. At this point, our pack was down to just Maud, who was getting right up there at 12 years plus.

Now an old girl, Maud was not initially thrilled to have a new housemate. Maud spent a few weeks being grumpy and grouchy towards Olive, and rejecting all interaction. But gradually, Maud came round and Olive’s sunny, happy disposition won the day.

There was never any problem. No violence, nobody got hurt — there was never actually any physical contact. Maud just let Olive know — vocally — to leave her alone.

Maud and Olive are now good friends and the contrast between them couldn’t be greater. Maud is really pushing the envelope of Cane Corso age.

She has hip dysplasia and, at a little over 13 years old, her legs are a bit wobbly and she sometimes struggles a bit to get around. Olive is an energy-filled youngster, sprinting everywhere and full of the joy of life.

So, all six of these dogs, two of them Cane Corsos, lived together in various permutations, in perfect harmony, as the cycle of life and death played out.

Coming back to our question about whether Cane Corsos can live with other dogs, the answer has to be a resounding yes.

Never at any time has there been a problem between any of them.

In fact, not only does experience as a Cane Corso owner show us that Cane Corsos can live with other animals — we would go further and describe them as the perfect family dog.

They are loyal and protective towards their family. Friendly towards our friends and reserved towards strangers, and following their owner’s lead with everybody they encounter.