Wondering whether you should get your Cane Corso’s tail docked? This is quite a hot question, as we’ll see.

In this article, we’ll look at why Cane Corso tails are docked, and see whether those reasons give you enough to make a valid decision, to dock. or not to dock. 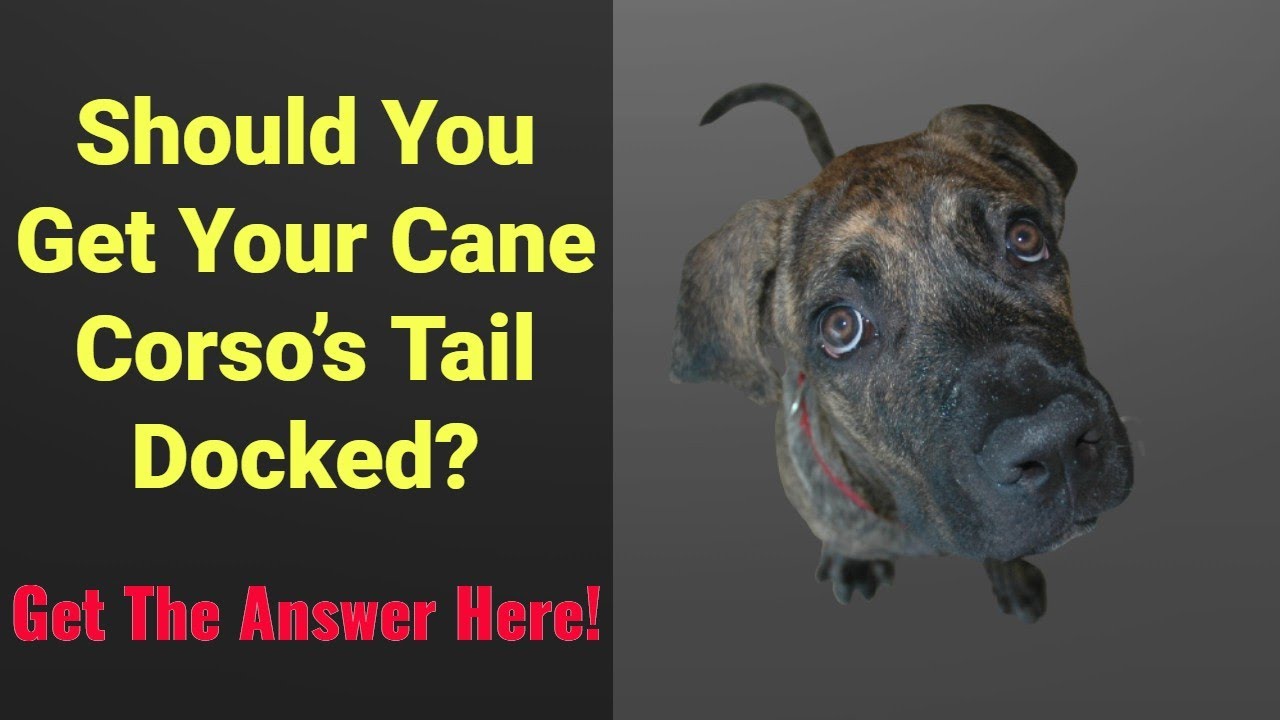 Why Are Cane Corso Tails Docked?

This concept probably dates back to when the Cane Corso’s duties including defending livestock and humans on Italian farms, fighting off and hunting large dangerous prey.

For a dog in these circumstances, docking the tail probably makes sense.

But, is your Cane Corso a working dog?

We'll look at this question in the next section...

The big majority of Cane Corsos today are not working dogs.

They are living an entirely softer life as a family dog.

For this, the largest group of of Cane Corsos, the old validations for docking the tail no longer apply.

Truth be told, I think the biggest reason for tail today is purely aesthetic — I think a Cane Corso with a docked tail is a look many people find pleasing.

What Is Tail Docking?

Tail docking is a procedure where the dog's tail is surgically shortened, typically by about two-thirds of its length.

The procedure is most commonly performed on puppies, usually at around 7-10 days old.

The practice of docking tails is an old one. Change comes slowly, and it is still common in some parts of the world.

There are a number of methods that can be used to dock a tail, but the most common is to simply cut it off with scissors.

A less intrusive option is known as ‘banding’. Basically, a rubber band is applied tightly to the tail and, after a few days, the section beyond the band drops off.

Do You Have To Dock A Cane Corso Tail?

There is no legal requirement to dock a Cane Corso’s tail.

As far as I know, the AKC breed standard used to require the tail to be docked at the 4th vertebrae, to to 1/3 the overall length.

But the current Cane Corso Breed Standard definitions allow for both a docked tail and a natural tail.

So there is no requirement there, either

It comes down to the preferences of the individual dog owner. Some people choose to dock their Cane Corso's tail, others just don’t want to do it.

Advocates for the practice of docking tails say there are pros and cons to both options. They say docking a Cane Corso's tail can prevent them from being injured if they get into a tussle with another animal.

But nature put the tail there for a reason.

Several good reasons, actually. The tail is a big part of a dog’s balancing mechanism.

Have you ever seen greyhounds running flat out?

Without their tail to help them balance. any dog can be more susceptible to injury.

The dog’s tail is also a huge part of its communication system.

Even us humans can plainly see when a dog is happy or sad, or scared, according to what the tail is doing.

Other dogs can interpret that with probably 1,000 times more sensitivity. Removing the tail, or cutting it back to a stump takes away all that communication from the dog.

Opponents of tail docking say there are no pros only cons. The average Cane Corso will be a family dog and he is not at risk from enemies grabbing his tail.

Ultimately, the decision whether or not to dock a Cane Corso's tail is up to the owner.

Some people dock their Cane Corso's tail because they believe it is a tradition in the breed, while others do it for cosmetic reasons.

Is It Cruel To Dock A Dog's Tail?

There is much debate over whether or not it is cruel to dock a dog's tail.

Proponents of docking argue that the procedure is painless and that it is performed for the benefit of the dog.

Opponents of docking argue that the procedure is painful and that it is performed for the benefit of humans, not dogs.

None of us have ever had our tails docked.

Proponents of the practice claim that it is painless, but how do they know?

What I know is that I don’t want somebody cutting several joints off any of my extremities, and I’m pretty sure there must be pain involved at some point.